As well as being reunited with my beloved teashop, my move back to London reunited me with my beloved dog, the mostly-border collie pictured licking an empty tin of golden syrup clean a few weeks ago. While walking him, I discovered that the paths where I used to go blackberry picking with my mother are also lined with elder trees. And once I’d noticed it, I kept seeing it everywhere. Our street here is full of elder. It lines the college playing fields over the road, the path down to the park, and the riverbank. So once it was in bloom, I trundled down with my dog, my trug and a pair of scissors, and carefully started collecting heads of flowers. I decided to view it as pruning, so I only took a few heads from each plant, and did my best to thin out clusters of flowers as my mother does in her back garden with the apple tree. This should let the plant focus its effort on only a few of the flowers it initially produced, eventually – hopefully – creating better fruit come the Autumn (when I’ll no doubt try out some elderberry recipes!) 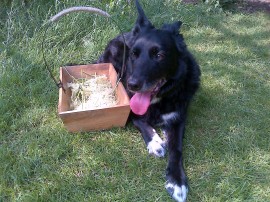 Armed with a trug full of elderflowers, I searched online for recipes for Elderflower Cordial. It seemed simple enough, and the only ingredient I didn’t have was citric acid. I popped out to a local pharmacy and headed home from successful – though only after being quizzed on what I wanted it for; apparently citric acid is used in the production of heroin. I’m fairly sure that, were I an accomplished heroin-producer, I’d be savvy enough to lie and pretend I made vast quantities of fruit cordial, rather than announce my drug-baron career and shady intentions. Anyway, my declaration of honest intentions believed and citric acid in hand, I began making my cordial.

One of the best things I found about making it was that for twenty-four hours – and my mother will vouch for this – our kitchen smelled delicious. Sliced lemon and orange, elderflowers, sugar and citric acid were steeped in good old tap water, in my beautiful Mason Cash mixing bowl (the one I admired on my window sill for three days after being given it as a birthday present). I covered them with a tea towel, and left overnight, stirring occasionally. This simple mixture gave off enough perfume that every time you opened the kitchen door, you were greeted with a gust of floral deliciousness that made your mouth water and almost tricked your subconscious into believing it was actually sunny outside. The next day, I strained the mixture through muslin, bottled it and voila! The cordial was done. I have to say if you’re thinking of making this yourself, I don’t know how long it keeps for – I confess mine didn’t last that long; my mother and I drank it before we could find out.

The success of the Elderflower Cordial Venture provoked my mum into asking that I find something to do with her bush of Lemon Balm. I experimented with Lemon Balm Cordial (exactly the same as the Elderflower recipe, except I substituted a lime instead of the orange) which was nice, but not as nice as the elderflower. However, the Lemon Shrub proved much nicer, not to mention a little more potent. I got the recipe from a book called Hedgerow Harvest that my mum bought from William Powell when she came to visit me, and it’s pretty simple. You take quite a lot of lemon balm leaves and rinse them, before sticking them in a bottles-worth of brandy with some lemons and lemon rind for three days. I then added half a bottle of dry white wine and sugar, and left for another two days before straining and bottling. It’s very easy, and the result is a little like Pimms – you can drink it on its own (though better over ice in my opinion as it’s quite strong!) but it’s also quite nice topped up with lemonade, or even sparkling elderflower. You can really taste the lemon balm, and it’s not too sweet either. Very refreshing, and Mum especially seems to enjoy it.

I also experimented with an elderflower champagne from the same book, but need to experiment next year with the quantities of sugar used, and possibly add some sort of preservative (possibly more citric acid) as my finished ‘champagne’ was far too sweet for most to drink neat, and one bottle has started going ever so mouldy on top (and I haven’t even opened it yet). That said, the unmouldy bottles made for delicious mixers, especially when added to a gin and tonic on a recent hen weekend – though I must point out that using an alcoholic mixer makes your trusty G&T a little stronger than you expect, and the mother of the bride should back me up on that! I was quite amazed – and delighted – that I discovered things to make from (more or less) wild plants while living on the outskirts of London. And I know from previous experience that the areas where I found the elder also provide a decent harvest of blackberries in the Autumn, and if you pick the right time of year, there are even some wild plum trees hidden by the railway line. I make sure I wash the fruit and flowers thoroughly; being on the outskirts of a city, not to mention by a railway line and series of factories, I imagine they’re more prone to pollution than the same picked out in the countryside. But it was still great fun, and I even managed to use the left over fruit from the various concoctions described above to make a sort of marmalade jam, by chopping the peel, flesh and pith of the citrus fruits very finely and boiling up in a little elderflower cordial. I then weighed this, added 75% of that weight in sugar and boiled to setting point[i] before filling sterilised jars and sealing. It might not be luxury marmalade, but it helps limit waste and it tastes lovely on toast.

All of my creations/experiments are poured, spooned or decanted into nice jars and bottles, some of which I bought and some of which are reused. I label bottles with big brown labels that you can tie on – this saves you peeling stickers of at a later date when you want to reuse the bottle again, and doesn’t look too bad. From experience I’d recommend using a water-resistant pen to do the writing – a few of my labels have ended up illegible as a result of having elderflower champagne splashed onto them during pouring. All in all, I’ve ended up with quite a nice array of delicious jams, curds and drinks, and if it wasn’t already obvious from this and previous posts, I’m quite proud of myself. Hopefully wherever I move next will prove just as fruitful (and flowerful) for more homemade experiments.

[i] Put a saucer in the freezer until it’s very cold. Test your jam/marmalade mixture by putting a drop of it on the icy saucer. Leave for a few seconds, and then nudge with your fingernail. If the surface wrinkles, your jam is at setting point and ready to be poured into pretty jars.

One thought on “Respect Your Elder”