Until recently, I’d only ever attended weddings as a child, running around with sticky handfuls of confetti. But all that changed last weekend at the Jeavons-Prinsloo wedding. I mentioned the bride’s hen party briefly a while back, after I managed to spike the mother-of-the-bride’s drink – entirely by accident I hasten to add. (I brought along a bottle of homemade elderflower, but failed to mention early on that it was elderflower champagne rather than cordial. In retrospect, possibly a mistake.)

The wedding took place in a picturesque village church, satisfyingly authentic as we could see the bride’s primary school from the churchyard – or at least the building that used to be it. The groom is in the army, and looked fantastic standing at the alter in his Number One dress, complete with red stripe down the trousers, silky gold curtain tassels and his medal shining brightly on his chest. He was I’m sure relieved to be joined after not too long a wait by the bride in her white dress, silky swathes flowing in a train behind her[i], adorable flower girls in pretty champagne and gold dresses, and bridesmaids also in champagne, with navy satin sashes; all complimenting the groom’s delicious uniform perfectly. Satin roses trailed over the bride’s shoulder and a cascade of golden curls down her back. And she had two shoes. Cinderella eat your heart out.

One of my favourite points of the wedding was the final hymn – the bride, chief bridesmaid, mother of the bride and many of her friends work in primary schools, either as teachers or in admin. The last hymn chosen was one I remember singing as an enthusiastic eleven year old – One More Step Along The World I Go. Wonderfully cheerful, rather fitting given the calling of the bride and her friends and family, and so perfect for the occasion.

After squishing as many people as possible into as few cars – meaning as few designated drivers as possible – we all headed to the reception in the village town hall. Strangely none of us thought to ask if there was a spare seat in the new couple’s chauffer-driven, open-topped Bentley. Everything was simply beautiful – we were greeted with flutes of gently sparkling champagne and a coordinated navy and cream table plan – and the tables had been creatively named after the couples favourite drinks from England (home of the bride) and South Africa (home of the groom). I was irrationally delighted to find out I was on the table christened ‘Gin and Tonic’, and almost as dismayed to see that I wasn’t on the table ‘Earl Grey’. But I’m sure if I had been I would have been just as disappointed not to be a Ginandtonicer – Mary Mary Quite Contrary has nothing on me. 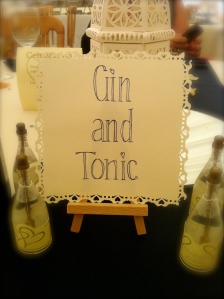 The bride and groom arrived and were snapped and papped as enthusiastically as any celebrity couple. There were amusing speeches, romantic and much photographed kisses (evidence below), a scrummy BBQ, huge chocolate fountain with strawberries, marshmallows and heavenly Turkish Delight so good I didn’t even dip it in the chocolate. There were bubbles to drink and yet more bubbles to blow, or attempt to blow as was the case for some guests at our table. There were army men with stereotypically girly nicknames (the groom is apparently ‘Princess’ – the anonymous source of this information was suspiciously cagey when I asked why…) and plenty of dancing, flowing conversation and much merriment. The traditions were stuck to with relish, including the cutting of the cake, the tossing of the bride’s bouquet, and a South African tradition of the groom removing the bride’s garter (something blue) with his teeth while blindfolded and bound with the groomsmen’s cravats. The audaciously-removed garter is then flung out to the men in the wedding party, and as with the more Britishly-prudish bouquet toss, the man to catch it will be the next to find himself at the alter.

I’m delighted that my first grown up wedding experience was of such a lovely country village wedding, and I don’t think the bride or groom could have wished for anything more. It was perfect, and a wonderful omen for their life together – I wish them all the luck in the world and more.

As if being invited to a proper wedding in my own right wasn’t enough to prove that I am officially now an adult, four days later I went and got myself a job. A Proper Job. I have now officially got my foot on the first rung of the career ladder – so watch out Glass Ceiling, I’m coming for you. Since being back in London with my parents, my friends and family have been aware that I was hoping to find myself a graduate position in a company where I can focus on personal development as much as on the job in hand, and ideally to do so in a role that will challenge me intellectually – at least after an initial period of the donkey work that gives you a chance to prove yourself. I received a phone call out of the blue asking if I would be interested in a role with a company my friend had worked for, a role she would have been interested in if only it had been in a location a little more convenient; she’s engaged to a Yorkshireman with a deposit on a house in York; the job is in West Sussex. Go figure. After a telephone conversation with the manager and a first interview, I was invited to a second interview less than a week later, with the shock of a presentation to prepare in and around the steak, cake, wedding present and outfits.

As I accepted my degree from the chancellor of my university, I assumed that I would never again need to remember anything about my final essays on whether 16th Century Renaissance humanist Desiderius Erasmus thought war was inherently evil, or on David Hume’s view that we have no personal identity (a true mind-boggle). And yet I found mself preparing a presentation on my final essays – admittedly on my insanely colour-coordinated planning processes and time management more than the content, but in order to remember one you have to remember elements of the other. A big mug of tea and a quick refresher course on Erasmus’ views on the behaviour of mercenary soldiers in war was all I had to ease my post-wedding hangover. Despite the cooking- and wedding-fun of the weekend before my interview, it seemed to go well. I got on with my interviewers, one of the ladies announced that she was in possession of as colour-coded a brain as me (thank God) and if I needed any more confirmation that it wasn’t an utter catastrophe, I got a phone call just a few hours later from one of the ladies, offering me the job. Smug much? Moi? Never!

The role is Category Insight Executive for a wine supplier/agent/company. I’m going to be analysing data and pulling out stories telling the journey of the wine. Anyone who knows me will know that I spend my life analysing and over-analysing. And now I have landed myself a role where I might be able to use that skill/flaw to actually make a living. Other exciting news is that it is slightly less city-based, and so I might be able to increase the frequency of my shooting, and apparently cakes are welcome in the office so my baking is safe too. Phew. A glass of bubbly with my parents to celebrate? Why not?![ii]

Within a week of my chip-based success and genetic-diagnosis, I had as a fully-fledged adult experienced a real wedding, complete with bubbles for both drinking and blowing. Days later I landed a Proper Professional Position working for a company that deals with more bubbles (definitely of the drinking persuasion) tucked in amongst all the wine. And had celebrated that with yet more bubbles! I start my new role next month; no doubt there’ll be some amusing misdemeanours to regale you with as I start another job – sorry, career – out-of-the-city, not to mention plenty of wine-based blunders to boot. But at the very least I promise you there will still be plenty of shooting and baking anecdotes. Wedding-fun and interview-success was only the second step of three making up the Fabulous Fortnight – there is nothing less than a Shotgun and Chelsea Bun Club finale still to come, complete with both guns and cake.

[i] Just so you can picture it accurately, there was enough luscious material in the train to cause the bride to later announce:

– “This is not a dress made for reversing.”