A couple of weeks ago I was presented with a free bag of organic fruit and veg, courtesy of Abel and Cole. Included in that bag was a punnet of peaches, which as a family we simply had not got round to eating. So one morning, I trundled downstairs clutching some pretty cupcake cases and a recipe book, intending to make peach cupcakes of some variety or other. I had been beaten to the punch; I walked into to the kitchen to see my mother, apron on, radio on, cake mixer on as she whipped up a summery fruit loaf – using up the peaches, just as I had intended to do. I could have been bitter about my baking intentions being thwarted, but the cake she made was really very tasty, and she had the Archers Omnibus (she who cooks has control of the radio) so I got to listen to it anyway, even without being Queen of the Kitchen. Even now I have seen some of the mythical countryside for myself, I feel it important to keep up with David, Ruth and the gang from time to time and remind myself where this all started.

I had just left the house for work last Thursday when I got a phone call saying there had been a leak somewhere in the clinic and please don’t come in. So I turned on my heel, retraced the 10-15 steps back to my front door and immediately decided that today was a Baking Day. One supermarket sweep later (all heavy-lifting credits go to my little brother) and I had planted my feet firmly in the kitchen, apron on, beautiful beloved birthday mixing bowl out and wooden spoon in hand.

We’ve had a little box of icing carrots in the pantry for a couple of years now, that Mum has been saving to adorn a carrot cake. We also had enough carrots in the house to satisfy Bugs Bunny, so you can see where this is heading. I followed the Hummingbird carrot cake recipe to start with, but at mother’s request and for a (slightly) healthier cake, used entirely wholemeal self-raising flour, and added sprinklings of baking powder and bicarb to help boost the little bubbles that should make my cake nice and light. I also added sultanas; thankfully everyone in my life in Twickenham likes sultanas, so I am free to enjoy using them once again! I also added some milk, as someone, somewhere told me, or I read/saw/heard, that the wetter your cake batter, the moister your cake – and it makes sense when you think about it. After all, where is a little cake going to find any extra moisture in a hot hot oven?! As with fruit cakes, carrot cake batter must have some oomph about it to hold up all those bits of carrot, nuts and now sultanas, but the mixture seemed too stiff. I popped in a generous splash of milk to loosen it before decanting my mixture into pretty turquoise spotty cupcake cases and silicon mini loaf moulds. A beep of the timer later, and the cakes were out cooling, getting ready for their cream cheese icing.

This again was a Hummingbird recipe to start with, but I often find that their icings are a little too soft to pipe. Perhaps I don’t start with my butter cold enough, but it’s certainly chilly enough to crumble into the sugar and send puffs of icing sugar into the air until the kitchen was full of a sweet, white fog. Anyway, this time I blitzed my butter and cream cheese together quickly before mixing in the icing sugar a bit at a time. I didn’t weigh it, I simply kept going until the mixture looked stiff enough to pipe – and it was! Once piece of advice here: don’t use a piping bag with a hole in. It leads to very sticky hands, a messy piping bag and counter, and worst of all, wasted icing. But eventually I had piped generous swirls of cream cheese icing onto each cupcake – topped of course with a little, iced carrot. I then piped more icing onto the loaves, snaking my way over the top of each one. Mum helped with decorating, popping blueberries (because we had them!) and carrots onto each loaf. In the end, we were left with some rather pretty cakes, even if I do say so myself! What they tasted like remained to be discovered, but they did at least seem to sit there with plenty of confidence and say “Hey Bugs, want some cake?” 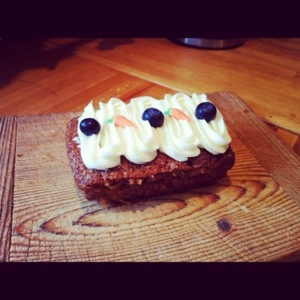 Batch number two was more of an adventure. Years ago, when I decided as a teenager that my life long dream was to become a chef, my aunt and uncle gave me Gordon Ramsey’s Secrets, a recipe book with lots of exciting things. I might get around to trying a few more of the recipes in years to come… Anyway, one of the dessert recipes (that I have actually made!) is for berry kebabs with a lavender honey dip, made with mascarpone cheese, and it was really lovely, indulgent but Summery all at once. This recipe was the inspiration for the second batch of cakes – why not try for indulgent Summeriness in cupcake form? I made a simple vanilla sponge cake mix, with what was left of the wholemeal flour topped up with white, and folded in some lovely juicy Spanish Blueberries. I even cut a couple up and mushed them a bit before folding those in too, in case it helped flavour the sponge (word to the wise: it didn’t).

As the cakes baked, I popped round to a neighbour’s and collected six lavender heads, four for the recipe and two for luck. I dissolved some sugar in water, just as Gordon instructs for his dip, and then popped the lavender heads in for two minutes to infuse over a low heat, filling the kitchen with a very relaxing, flowery scent. Once infused and left to cool (with lavender still in), I strained the syrup and mixed it with honey, mascarpone cheese and 50g butter (the same amount Hummingbird instructs for the cream cheese icing) before again adding icing sugar until the mixture looked stiff enough to pipe, and purple food colouring until the icing was – wait for it….. lavender purple. Who could have guessed?! This icing was piped on top of the cooled buns in an attempt at a rose – starting in the centre, and slowly working your way out so the lines of the icing (from the nozzle) overlap and loop a bit like petals. The final adornment was a sprinkling of lilac edible glitter, and the cakes were finished! I sat down with a big mug of Earl Grey tea and admired my lovely little creations, basking in a glorious mix of pride and smud self-satisfaction. 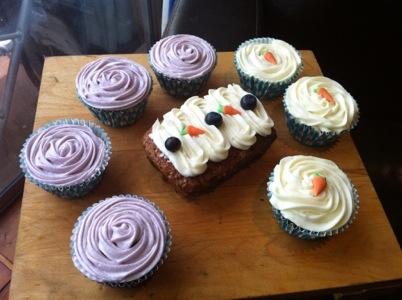 For the verdict on the taste, you’ll have to wait until the next post. I elected to save most of them to take along to E J Churchill’s mini-game fair, speedily set up in a fortnight since the announcement of the cancellation of the CLA event. I knew a few of the girls from the Shotgun and Chelsea Bun Club would be there with stalls, selling with lovely cards, bracelets and tweed, and thought that cakes would make a nice surprise for them (in true Chelsea Bun spirit!) I shall be writing about that – including the shot-shredded cabbage, smashed melons and splattered eggs that rained down on us – soon, but for now, that’s all folks!