Last-weekend-but-one kicked off what has turned out to be a fortnight of life-changing discoveries and general wonderfulness, including everything from home-cooked chips to award-winning cupcakes, county wedding confetti to clay competitions, a foot on the first rung of the career ladder to a long-dreamt of diagnosis…

First came my dad’s birthday, where I got to play chef for a day, i.e. a lovely day for me to enjoy first dibs on the kitchen! After a sunny dog-walk and swim (though for him only) via the various wild fruit plants, including plums (not yet ripe), blackberries (mostly not ripe) and elderberries (also mostly unripe), I ventured to the town-hedgerows, also known as aisles in the supermarket. Before I’d even set foot in the supermarket, my phone rang. As a result of that phone call, sat in my little toboggan-car in the car park, I picked up something far more interesting than groceries: it was my neurologist (check me out – I have a neurologist! I shall call him NeuroDoctor from now on) and he had a diagnosis for my silly hands/feet, non-carpal tunnel problem. Note to the reader: if you’ve not read previous blog posts, or are more interested in the ventures into country life that this blog is supposed to be about than my neurological conundrums, you can skip the rest of this paragraph and the next. Anyway, NeuroDoctor was calling let me know that I’ve got a genetic condition called HNPP, or HereditaryNeuropathyWithLiabilityToPressurePalsies. More importantly for me, he also told me that my MRI scan was completely clear – and sent me the photos! 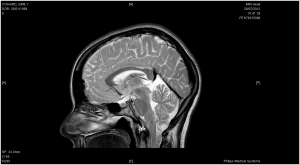 This means that my brain is nice and safe (and I have proof it exists, for all my doubting friends). While my condition isn’t ‘curable’ – unless you have a spare gene knocking around (apparently I’m missing one and that’s what’s causing my problems) – it’s much more favourable than some of the things my imagination and well-intentioned friends had teamed up to scare me with, and so brings peace of mind along with the numbness. The fun thing about it is that because it’s genetic, it’s pretty damn likely that my father also has it, meaning that when I got home I had the fun of being able to say:

– “Happy birthday Dad, hope you like your present; I got you a genetic disorder!”

As well as a diagnosis, I brought back some groceries from the supermarket, and so began my day of cooking. For the first time in my life, I decided to try making chips from scratch, the idea being to prepare steak frites and salad for father’s birthday. With a rainbow of tomatoes halved, salted and left in the sun to tastify, I set about preparing my chips. As per Professor Blumenthal’s instructions, I’d picked up some Maris Pipers, and cut them into chips. The bizarre recipe includes boiling the chips to the point of disintegration, then popping them into the freezer until frozen through. Then you fry them from frozen, then freeze once again before being fried yet again just before eating. Even though 1/3 of my chips disintegrated completely at the boiling stage, I froze them anyway and alongside my a big bowl of Proper Chips (and I hope my family will agree that they were very tasty!) I served a smaller one optimistically labelled ‘scramptions’, which were thankfully all hoovered up by a very happy family (I think I got away with my overly-generous label!)

Rewind a little to the point where the chips are in their water, bubbling away merrily. While the chips bathed/disintergrated, I pulled out the meat mallet and started bashing the steaks to within an inch – or half-centermetre – of their lives. Prof Blumenthal recommends leaving your steak out on a plate in the fridge for two days to let the air circulate around it and help it ‘age’. As I foolishly read this the morning of the meal, I could only leave my steaks out for a few hours, but nonetheless I laid them all out on plates to ‘age’ as best they could in the limited time frame. Aging under pressure!

Main course now prepped with only a rocket salad to add to the mix later, and I could start the fun bit: pudding.

Dad had requested friands as a birthday cake this year. ‘Ah ha’ I thought. ‘Perfect.‘ Unknown to him, a couple of months ago a most dedicated Chelsea Bun had journeyed down from Lancashire for a shoot, complete with a tin of mouth-wateringly delicious raspberry and almond friands. I immediately begged for a copy of the recipe and started looking for an excuse to purchase a friand tin. I was sadly let down by Lakeland, who had not a single friand-anything available on their website. The one I eventually purchased turned out to be a mini friand tin, and this has left me in a quandary. Are mini friands are a bad thing – less cake than a proper-size cake? Or are they a blessing, because you can eat more of them before the guilt sets in, and look elegant and dainty in the process of devouring your mini-cakes? One good thing however is that you have more little cakes to adorn with fruit and can therefore create lots of different ‘flavours’ of friand (another excuse to eat more than one…)

Despite the debate, I had only a mini-friand tin to work with, so that’s what Dad would be having for his birthday. The bulk of Dad’s birthday mini-friands were adorned with raspberries and flaked almonds, as per the Chelsea Bun recipe, but a few were topped with fruit harvested earlier that day from the hedgerows (read: our garden and the park, while out with Pascoe the dog). This means that we had:

–       An apple and elderberry friand, apples courtesy of the tree in our back garden and elderberries picked walking the dog;

–       And saving the best for last, an alpine  strawberry friand with a small handful of strawberries from a plant that my Mum has tended for years that produces small fruit, like a miniature strawberry but white inside and so very tasty.

I was quite happy with the friands, though I’ll admit the ones the Lancastrian Chelsea Bun brought to the shoot were so much lighter than mine, so I might need to experiment whipping my egg whites a little more. Or possibly buying a proper size tin, for proper size cakes. Or both.

Cakes done, steaks bashed, and chips were on their third cooking. Last thing to prepare was a rocket salad, with parmesan. Rather than indulge in a whole big block of parmesan, which we simply didn’t need, I made friends with the nice lady behind the deli counter at the supermarket who cut me the world’s smallest block of cheese, for an amazing £0.32 (the price sticker was bigger than the cheese!) And that little wedge of cheese made the world of difference, accessorising the peppery leaves. With a splash of white wine vinaigrette and the rocket salad was done.
Tomatoes with a glug of olive oil, salt and pepper: done.
Steak, briefly seared on a hot griddle pan: done.
Prof Blumenthal’s chips: done, frozen, done, frozen and for a third and final time: done.

And I can wholeheartedly say it was a Pretty Good Meal. If you have a whole day to dedicate to preparation, they really were remarkably good chips, and easy to make just time-consuming. But you do get plenty of time in between the cooking/freezing to get on with other things (like making cakes). It was a pretty good day all in all, what with discovering I had a healthy brain, finally getting a diagnosis after months of mystery (not quite gift-wrapped but close!), successfully preparing home-made, thrice-cooked chips AND fruit friands (including Mum’s delicious strawberries!) and finally tucking into a very tasty meal with my family!